Jason, with the Audible Bark 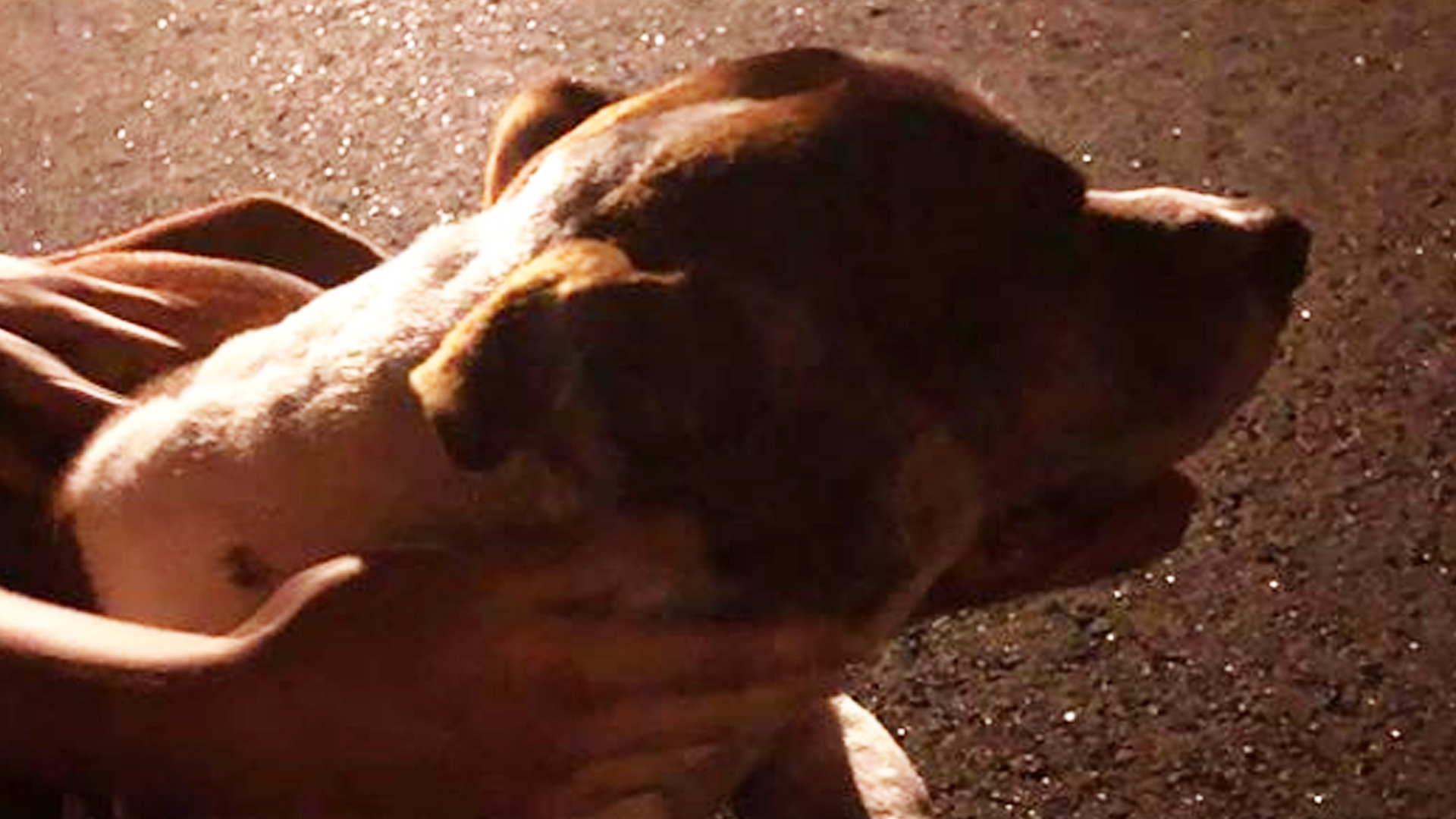 A month ago, my co-worker, Bridgette and I were driving home from the field late after catching and attaching satellite tags to alligators at the Okefenokee Swamp Park. As you may have read in the blog, The Silent Bark, we were discussing how people and events happen in our lives at just the right moment. Within seconds, we pulled up on a distressed driver who just had hit a dog. The dog, a weathered, aged pit bull, white with brown splotches, appeared to be dead in the middle of the road. We pulled over and multi-tasked assessing the dog’s condition and comforting the driver. You may recall that the dog responded non-aggressively to our approach and he could not move the rear half of his body. He was bleeding internally. Bridgette and I are wildlife biologists so, maybe arrogantly, I am confident of our characterization of his true state of injury. Some caring neighbors came on scene. As I reflected in the previous blog:

“We sat with the dog as he transitioned, giving him treats and water and positive energy, encouraging him to go to his next home and release his pain. He was loving and sweet and peaceful and never uttered a bark or a whimper in the 2 hours we were with him before Animal Control arrived in response to the police call. Our officer reflected she had not seen people come together like this over an animal hit in the road. In his final silent bark, he was a teacher and a moment of hope in a world so divided.”

Bridgette called me today. She had encountered Animal Control at her vet and she asked about the dog. He is ALIVE and he is now up for adoption! His name is Jason.

I cried. I think for many reasons. I felt so happy that Jason is alive and going to be welcomed into a new home, a healing start. I felt so appreciative of Jason who was in stage of physical inability and pain yet brought all of us involved into a state of collective caring and emotional ability. I felt so respectful of that moment when Bridgette and I could not just drive by suffering.

Jason never vocalized (non-biologists refer to dog vocalizations as a bark). We did all the talking. Comforting him and encouraging him to move away from the pain. He almost passed a couple of times, his breathing fast then slow, heartbeat staggering and waning. We vocalized love and peace. I wonder if he heard us and if love kept him fighting to stay in this place. Or maybe it was just the voices in the background that mechanically kept him from drifting to the light. There are plenty of instances with people who were dying where talking kept them on this Earth.

Do we truly realize the impact of our voice? Sometimes we use it so carelessly, spouting off in a moment of fear, pain or aggression, so entrenched in an adrenaline rush that our prefrontal lobe is sent to time out along with our reasoning. Why do we do that? Voices are power and look what they can do when used strategically and for the betterment of humanity. Voices are so powerful that even a few words, even a single moment, can mean either a world of destruction or a world of healing to those who are listening. The choice becomes yours how to use your voice.

I ended the last blog about this being I know now as Jason with, “Voices are heard when we are willing to hear them.” I should have said, “Voices are heard when we are willing to listen to them.” The difference between listening and hearing is often a point of differentiation that occurs in the briefest moments of the universe. Hearing is a biological capability with which many of us are blessed. Listening extends into incorporating what is being heard through our anatomical features. Listening should trigger compassion for another being. Listening should be congratulated because you achieved a moment in which you were able to filter out the raucous sounds of our world to focus intentionally on something that you care about so much that you simply could not miss out; you simply could not just drive by.

I raise my gratitude to the many loved ones and complete strangers that have come across me in my moments, stretched out in the road, seemingly paralyzed, still alive and fighting. Until very recently, I thought that strength was standing up on my own, not showing weakness or inconveniencing anyone with a bark for help. That’s not reality, folks, and honestly, I never fooled anyone with that guise. We were given voices for a reason, to shout out with praises and song and attraction and to shout out when we need a hand getting out of the road. We are a communal species and we need social interactions. I once read that the pathway to joy is connection, and the pathway to sorrow is separation. (I think many of us have felt those effects of separation lately.) I wonder if Jason still would have made it if we had not been there to make a connection.

The moment that calls you sometimes is not a pleasant one and may instantly feel uncomfortable or sorrowful. Not driving by a moment that tugs at our listening can be conflicting and can trigger our adrenal system evolved to protect us from danger. That said, while it is not always the smart move to engage in the middle of a problem, it rewards frequently enough that it should create pause in your heart to not just drive by something you care about and something that triggers your value system. You could be driving by a gift, a lesson ripe for the yearning and the learning. One thing that inspires me is that when we involve ourselves in the moment of discomfort or sorrow, we may actually make a difference when we stop and make humanity’s problem our problem. Think of the Jasons in your life. Stop for them and help them out of the road. They are not weak; they may just need a helping hand to a safe shoulder. And honestly, you never know who is really going to heal who. Jason did some healing of me that night.